This is the first time such data has been made public with the figures showing how many people have been referred to Prevent and what type of support, if any, they went on to receive including how many have received specialist support through Channel. The data is broken down by the type of concern, age, gender, and which sector the referral came from.

At its heart, the Prevent programme is just one of a number of ways to safeguard vulnerable people from exploitation. The voluntary Channel scheme has seen real results in helping divert people away from terrorism and violence. The programme is helping to save lives and keep us safe.

The Government has been determined to bring greater transparency to the programme and I am delighted that by publishing these figures we can help inform the debate around the policy. There is still a way to go to improve the approach and awareness of how to better safeguard our children and vulnerable adults, but the policy is going in the right direction.

Channel is a voluntary, confidential programme which operates throughout England and Wales to safeguard people identified as vulnerable to being drawn into terrorism. It is a multi-agency process, involving partners from the local authority, the police, education, health providers, and others. Referring possible cases of early stage radicalisation works in a similar way to safeguarding processes designed to protect people from gang activity, drugs, and physical/sexual abuse.

Who can make a referral?

A referral can come from anyone who is concerned about a person they know who may be at risk of radicalisation, whether a family member, friend, colleague or from a wide range of partners: social services, children and adult services youth offending teams, health, police, education establishments, and places of worship and community organisations (through their normal safeguarding process).

What happens to a referral?

All referrals are carefully assessed by the police and the local authority to see if they are suitable for Channel or may require another intervention such as mental health support. If suitable, the case is discussed with all relevant partners at a Channel panel to decide if an intervention is necessary. Referred individuals are informed and must give consent (or via a parent or guardian if they are children) before an intervention can take place.

How does a Channel panel work?

The Channel panel is chaired by the local authority and works with multi‐agency partners to collectively assess the risk to an individual and decide whether an intervention is necessary. If a Channel intervention is required, the panel works with local partners to develop an appropriate tailored support package. The support package is monitored closely and reviewed regularly by the Channel panel.

Who sits on a Channel panel?

The Channel panel is chaired by the local authorities and can include a variety of statutory partners such as the police, children’s services, social services, education professionals and mental health care professionals.

What kind of support is offered via Channel?

The type of support available is wide-ranging, and can include help with education or career advice, dealing with mental or emotional health issues, drug/alcohol abuse, and theological or ideological mentoring from a Channel Intervention Provider (A specialist mentor). 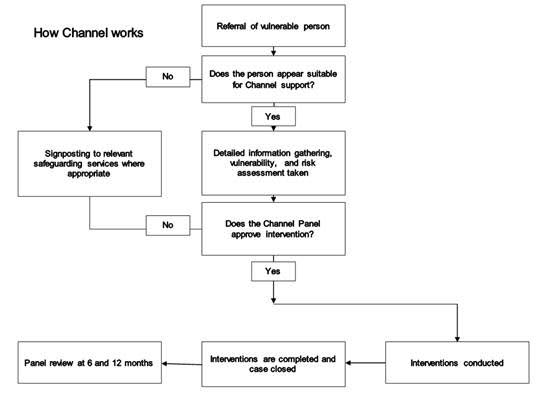