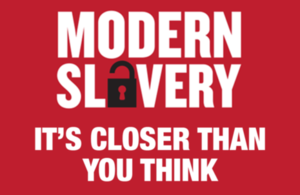 The UK introduced the first dedicated legislation to tackle modern slavery. The government has had an ambitious Modern Slavery Strategy in place since 2014.

In October 2017, we published research that identified 17 distinct types of modern slavery in the UK. The findings are used to inform our response to preventing modern slavery from taking place.

In June 2019 the UK cemented its status as a world-leader in the fight against modern slavery by investing £10m to establish the Policy and Evidence Centre on Modern Slavery and Human Rights. The research centre will redouble efforts to uncover the true scale of modern slavery, expose more trafficking networks and better inform our action to stamp out these crimes.

The Modern Slavery Act 2015 gives law enforcement agencies the tools to tackle modern slavery, including a maximum life sentences for perpetrators and enhanced protection for victims. The number of live police operations has increased since the Act became law, from 188 police operations in December 2016 to over 1,479 at present.

The government’s 2019 Annual Report shows significant progress in tackling this crime with almost 7,000 potential victims referred to the National Referral Mechanism (NRM) in 2018, a 36% increase on the previous year.

More potential victims are being identified and protected due to a greater awareness and improved understanding of modern slavery. In the year to March 2019, 5,059 offences of modern slavery were recorded by police. This is a 49% increase compared with the previous year (3,393 offences).
In 2018/19, the number of completed prosecutions for modern slavery offences increased to 322. The number of convictions also rose to 219 (a 18% increase on 2017/18), with the conviction rate reaching 68% in the same period.

We have world-leading measures such as the requirement for businesses with over £36m turnover to comply with Transparency in Supply Chains legislation (TISC).

As a result of this landmark legislation many companies are taking concrete action to address the risks of modern slavery and improve the lives of vulnerable workers in their operations and global supply chains.

However, while thousands are taking their responsibilities serious there are still too many that have published poor quality statements or are failing to fulfil the basic legal requirements. That’s why we have written to chief executives of 17,000 businesses about their obligations and made it clear that there are no excuses for non-compliance.

The Government has committed to publishing its own transparency statement.

In March 2019, the Government, in partnership with the Ethical Trading Initiative and Organisation for Security and Cooperation in Europe, hosted an international conference on addressing modern slavery in public procurement.

We are working in partnership with business to accelerate progress and help smaller businesses take action, through the Government’s Business Against Slavery Forum, chaired by the Home Secretary. CEOs from a range of multinational organisations work with the government to share experiences and galvanise action on this issue.

We are implementing significant reforms to the National Referral Mechanism which will make substantial improvements to a system which is supporting more victims than ever before.

The launch of the Single Competent Authority is allowing decisions to be made in a more efficient and streamlined way, while Multi-Agency Assurance Panels provide additional independent scrutiny to ensure quality decision-making.

These reforms will also ensure the NRM helps support victims to leave situations of exploitation and enables them to begin to recover and rebuild their lives.
The government will ensure victims receive the right support through the development of a safehouse inspection regime in partnership with CQC. We are also piloting new approaches with six local authorities to identify best practice in supporting victims to move out of NRM support and link up with local services so they can build lives free from exploitation and vulnerability.

Other reforms include improving victim identification through a new digital referral form and conducting a review of how First Responders refer victims into the NRM.

We consulted extensively with key partners on the reforms to the NRM – including charities, police, law enforcement and the Independent Anti-Slavery Commissioner.

NRM statistics show that the most common country of origin for a victim of modern slavery is the UK, which is likely to highlight the growing threat of county lines gangs in grooming and exploiting young people.

The government recognises the particular vulnerabilities of child victims of modern slavery, including trafficking. This vulnerable group of children are entitled to support and assistance and require tailored support which addresses their specific needs and vulnerabilities.

To ensure the correct ICTA model is rolled out, a staggered approach has been adopted with built-in assessments along the way. Currently ICTGs have been expanded to one third of local authorities in England and Wales. The service has been live since January 2017 in Greater Manchester, Hampshire and Wales, and has been expanded to the West Midlands Combined Authority, the East Midlands and the London Borough of Croydon.

In summer 2019, the Home Office in conjunction with the University of Bedfordshire published an evaluation of the ICTG service in early adopter sites which is available here. The evaluation looked at the implementation of ICTGs, how the ICTG service works alongside existing service provision and the outcomes for children who had an ICTG, including the outcomes for different groups of children.

The UK government’s 2017 global Call to Action to End Forced Labour, Modern Slavery and Human Trafficking by 2030 now has over 85 endorsements and significant steps have been taken to step up global efforts against modern slavery.

We are strengthening cooperation with countries from where victims are regularly trafficked to the UK, and we are leading global change through multilateral organisations such as the Commonwealth and UN.

Our efforts are supported by a £200 million UK Aid commitment, which is helping to catch offenders, support victims and prevent people falling into exploitation. This includes the Modern Slavery Innovation Fund, which supports overseas projects to trial innovative ways of stopping modern slavery.

In May 2019, Sara Thornton formally started her role as the UK’s Independent Anti-Slavery Commissioner, following her appointment by the Home Secretary.
The Commissioner’s role is to encourage good practice in the prevention, detection, investigation and prosecution of modern slavery and the identification of victims.

In July 2018, the UK Government commissioned an independent review of the Modern Slavery Act 2015. The aim of the Review was to identify where the Act is working well, what can be improved in the implementation of the Act, and whether specific areas of the legislation need to be strengthened. The Review was undertaken by Frank Field MP, Maria Miller MP and Baroness Butler-Sloss. The final Review report was laid in Parliament in May 2019.

The final Review made 80 recommendations across four themes: