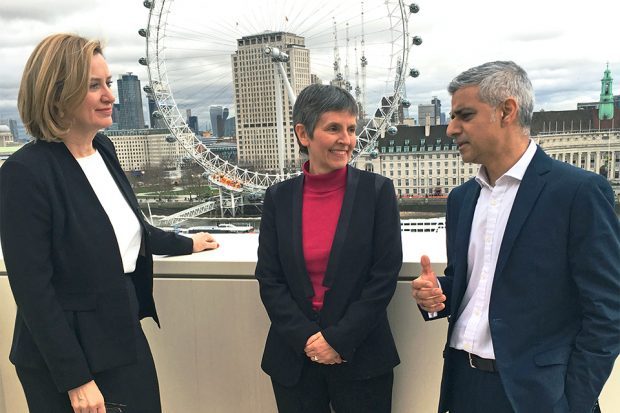 Cressida Dick will be the next Commissioner of the Metropolitan Police, Home Secretary Amber Rudd announced today (Wednesday, 22 February).

She will lead the biggest police force in the United Kingdom, with more than 43,000 officers and staff and a budget of over £3bn. Working with the Mayor’s Office for Policing and Crime (MOPAC) and partners across the criminal justice system, she will be responsible for overseeing the Metropolitan Police’s crucial work preventing crime, bringing offenders to justice and continuing to ensure an effective national response to the ongoing threat of terrorism. She will lead the Metropolitan Police through a time of significant change, and have a duty to uphold public confidence in the force.

Four candidates were invited to attend final interviews with the Home Secretary, Minister for Policing and the Fire Service, and the Mayor of London this week.

Cressida Dick is an exceptional leader, and has a clear vision for the future of the Metropolitan Police and an understanding of the diverse range of communities it serves. I am delighted Her Majesty has agreed my recommendation after a rigorous recruitment process which highlighted the quality of senior policing in this country.

She now takes on one of the most demanding, high-profile and important jobs in UK policing, against the backdrop of a heightened terror alert and evolving threats from fraud and cyber crime. The challenges ahead include protecting the most vulnerable, including victims of sexual abuse and domestic violence. Cressida’s skills and insight will ensure the Metropolitan Police adapt to the changing patterns of crime in the twenty-first century and continue to keep communities safe across London and the UK.

Cressida is absolutely the right choice to lead the Metropolitan Police as this Government continues its work to reform the police, and I look forward to working with her to make a real difference to policing in the capital.

Cressida Dick will be the first female Commissioner of the Met in its 187-year history, and the most powerful police officer in the land. She has already had a long and distinguished career, and her experience and ability has shone throughout this process. On behalf of all Londoners, I warmly welcome Cressida to the role and I very much look forward to working with her to keep our capital safe and protected.

This is a historic day for London and a proud day for me as Mayor. The Metropolitan Police do an incredible job, working hard with enormous dedication every single day to keep Londoners safe, so for me it was absolutely essential that we found the best possible person to take the Met forward over the coming years and I am confident that we have succeeded.

Minister for Policing and the Fire Service Brandon Lewis added:

Cressida brings impressive skills and extensive experience to her new role as Metropolitan Police Commissioner. This was a tough recruitment process, but she demonstrated very clearly that she is the best person to take on this demanding role and I look forward to working with her.

I am thrilled and humbled. This is a great responsibility and an amazing opportunity. I’m looking forward immensely to protecting and serving the people of London and working again with the fabulous women and men of the Met. Thank you so much to everyone who has taught me and supported me along the way.

Six people applied. Four were shortlisted, and met the Mayor of London Sadiq Khan and Deputy Mayor for Policing Sophie Linden before selection panel interviews chaired by the Permanent Secretary of the Home Office, Mark Sedwill, earlier this month. All four were invited for final interviews with the Home Secretary, the Minister for Policing and the Fire Service and the Mayor of London.

Following changes to the Appointment of Chief Officers of Police (Overseas Police Forces) Regulations in 2014, this was the first time the post of Commissioner was open to applicants from specified countries overseas. All six applicants were from a UK policing background.

The post was advertised as a fixed term contract for five years. The exact terms and conditions of service for this appointment, including the start date, will be agreed between the candidate and the Mayor’s Office for Policing and Crime (MOPAC) in accordance with Home Office Police Regulations.

Cressida Dick joined the Metropolitan Police Service in 1983.  She was a Superintendent at Thames Valley Police before rejoining the Metropolitan Police as a Commander in 2001.  She was appointed as the Deputy Assistant Commissioner for Security and Protection in 2007, before becoming the Assistant Commissioner for Specialist Crime in 2009.  She was responsible for tackling all non-terrorist serious crime in London as well as leading a modernisation programme.

In 2011 she was made the Assistant Commissioner for Specialist Operations responsible for countering terrorism and extremism.  She led the national security operations for the Queen’s Diamond Jubilee and the 2012 Olympic Games.  During her time in the Metropolitan Police she also led the reinvestigation into the murder of Stephen Lawrence and the police response to the murder of Lee Rigby.

She briefly acted as the Deputy Commissioner before joining the Foreign and Commonwealth Office as a Director General in 2015.  She was awarded the Queen’s Police Medal for services to policing in 2010 and a CBE in 2015.